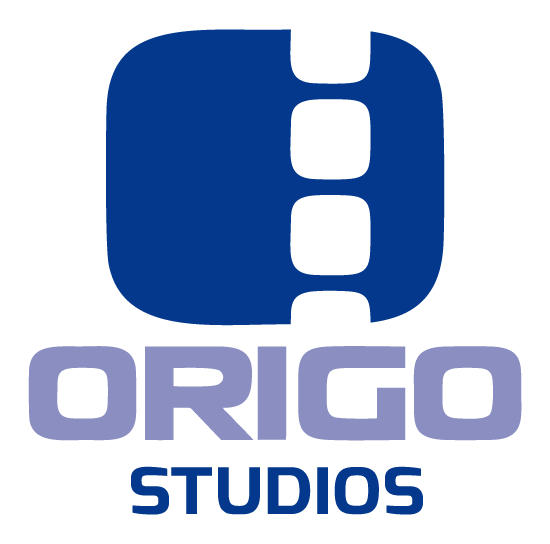 We can do more together for our future.

ORIGO STUDIOS is committed to foster and promote a more sustainable and efficient film industry.

We play an active role in raising awareness of the environmental impact of film production and in offering solutions towards a green-friendly approach to our clients.

This page aims to collect the best practices developed and adopted by us and our clients devoted to sustainability in the audiovisual industry.

The tools at GPG were created by the major studios and industry professionals to help you plan, communicate, implement, and track sustainable production practices on your set:

ORIGO Film Group Filmgyártó Zrt. is committed to the issue of sustainable development, including climate and environmental protection, and thus strives to reduce its carbon footprint in its activities.

Our company is committed to environmentally conscious operation and sustainable development, and wants to reduce its ecological footprint. Therefore, we only plan to buy green electricity in the future to meet our electricity needs.

Why do we choose green electricity?

With the “Zölderedet” certificate, consumers can prove that the amount of electricity they use comes in part or in whole from renewable sources. This certificate is a certificate issued by an internationally qualified company based on EU standards.
But there is also an opportunity in the Hungarian market that offers not only green power, but also a green cooperation package. In addition to green electricity, this includes:

The decisive part of our company’s energy consumption is electricity and district heating, therefore our efforts are aimed at continuously increasing the efficiency of the use of these types of energy. The importance of this is underlined by the fact that increasing efficiency also reduces greenhouse gas (GHG) emissions, which is the most important environmental task for all responsible companies today. The GHG emissions of ORIGO Film Group Filmgyártó Zrt. from the last three years are presented in the table below. 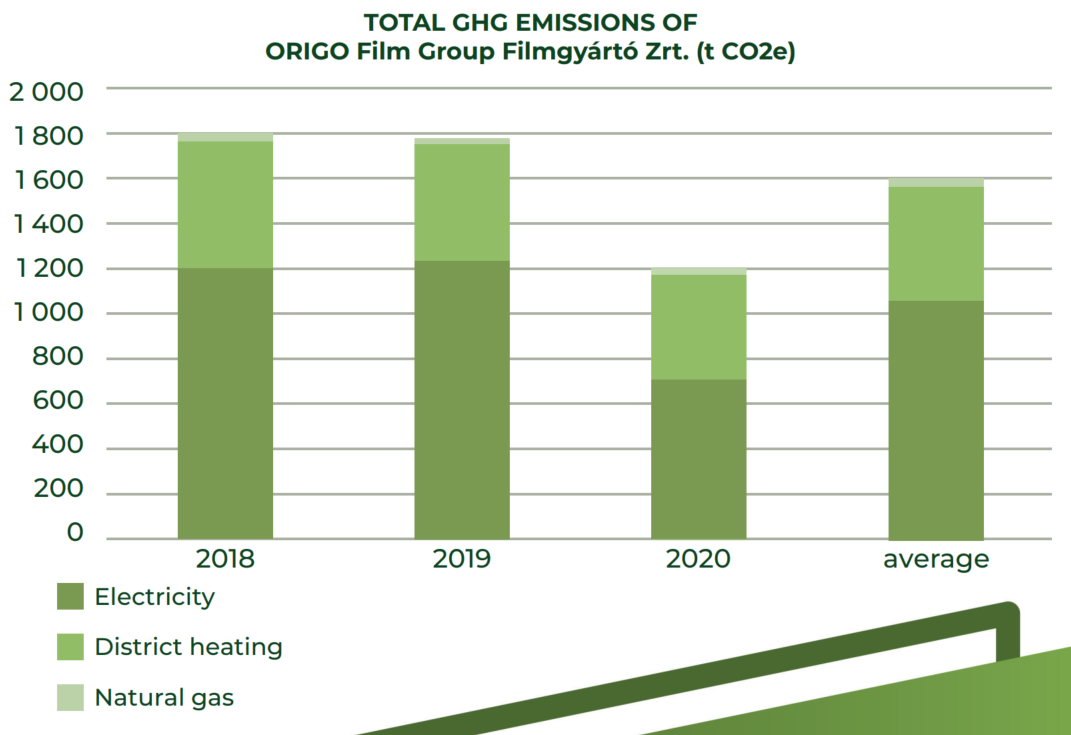 It is definitely noteworthy that the use of district heat does not result in GHG emissions locally, because the waste heat from the FKF Nonprofit Zrt Waste Utilization Power Plant is used in the district heating service. Almost half of the heat required for district heating in Hungary – 76% in the capital city – is generated in power plants that produce both electricity and heat energy. As a result, less fuel is required to produce these resources than if they were produced separately.

District heating is used entirely to heat the main building and the filming sites. As such, the primary goal throughout construction was to keep the transmission heat loss of the building much lower than the permissible value was even ten years ago. 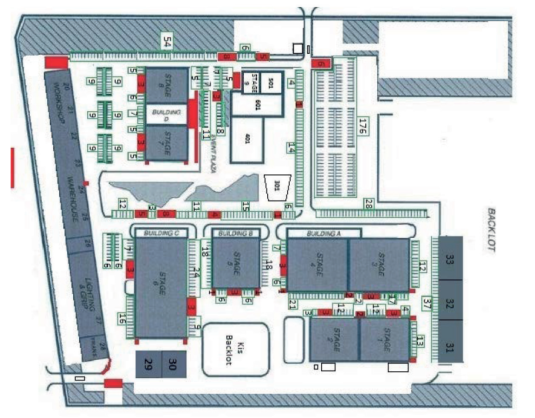 The table below shows the specific heat loss of buildings compared to the permissible “requirement level for nearly zero energy buildings.”

It was demonstrated by a percentage value “shown in the fifth column of the table” that all buildings are highly compliant with the 2021 specific heat loss requirements.

When constructing new buildings, the goal is to achieve a minimum of BB rating, as can be seen in the implementation of warehouses 31, 33. 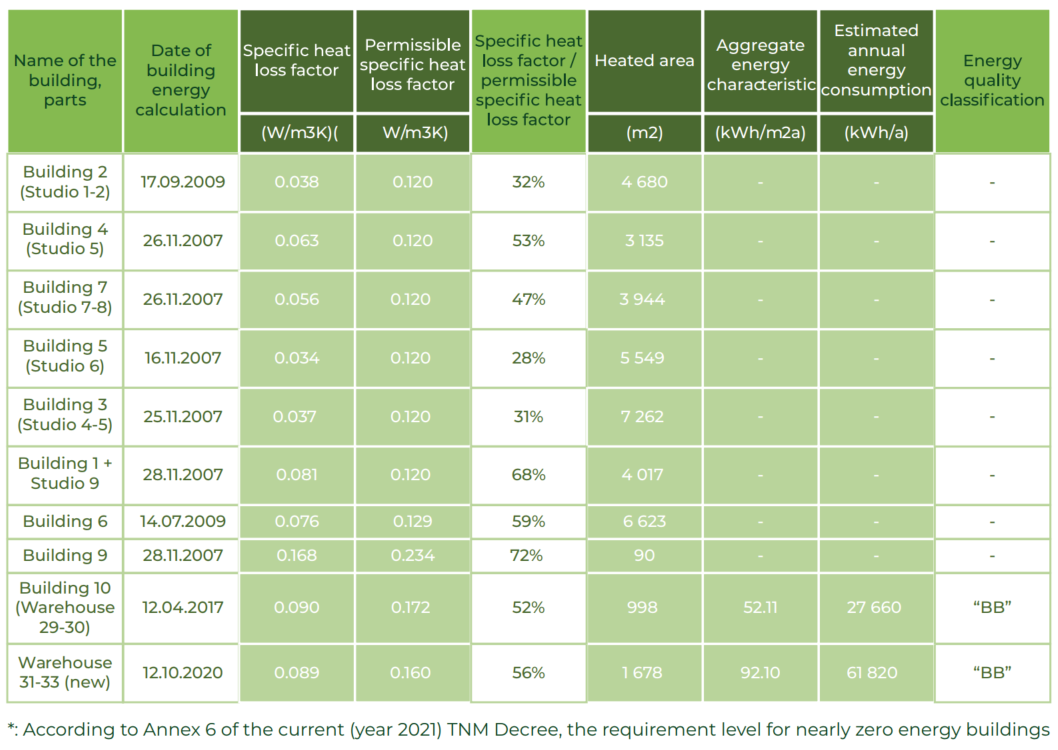 The purpose of this chapter is to define baseline energy indicators and specific values (KPIs) for energy efficiency. 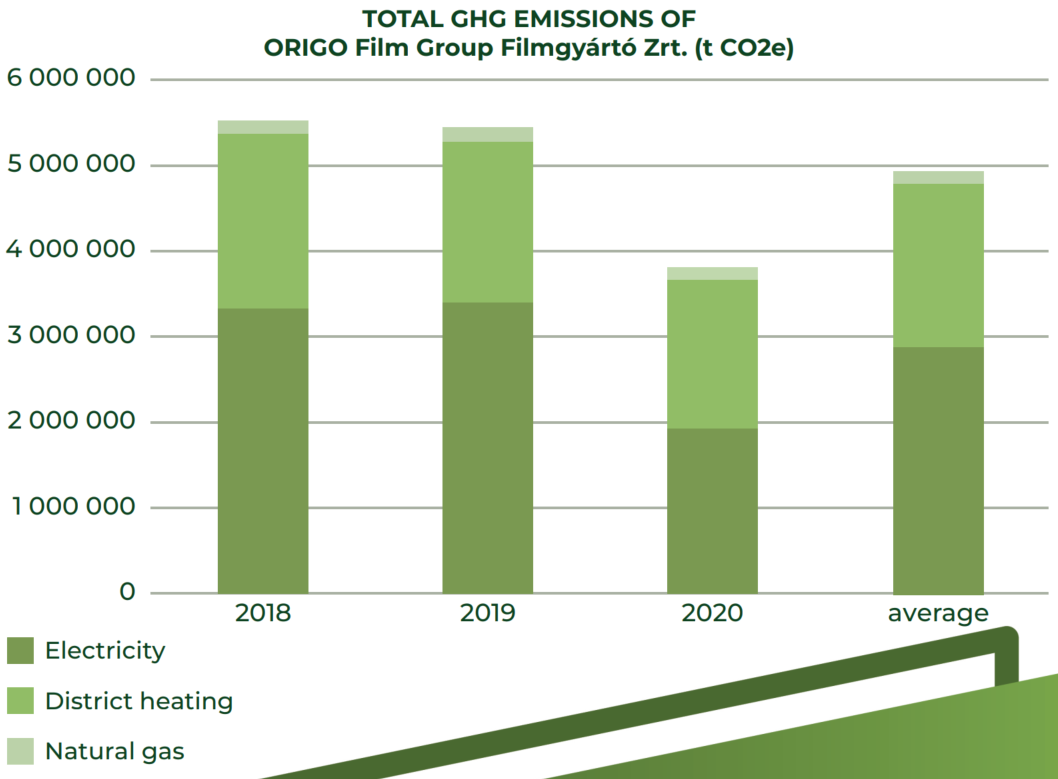 The distribution of electricity consumption over the last three years is shown in the diagram below. We specifically help each production to meet customer needs and be the most energy-efficient operation,. Therefore, with our extensive sub-meter system, one can accurately detect the consumption of each filming location, and even the largest energy consumption can be measured separately.

Our natural gas consumption is entirely determined by the heat production for the kitchen and DHW of the main building.

The distribution of our district heat consumption over the last three years is shown in the diagram below. 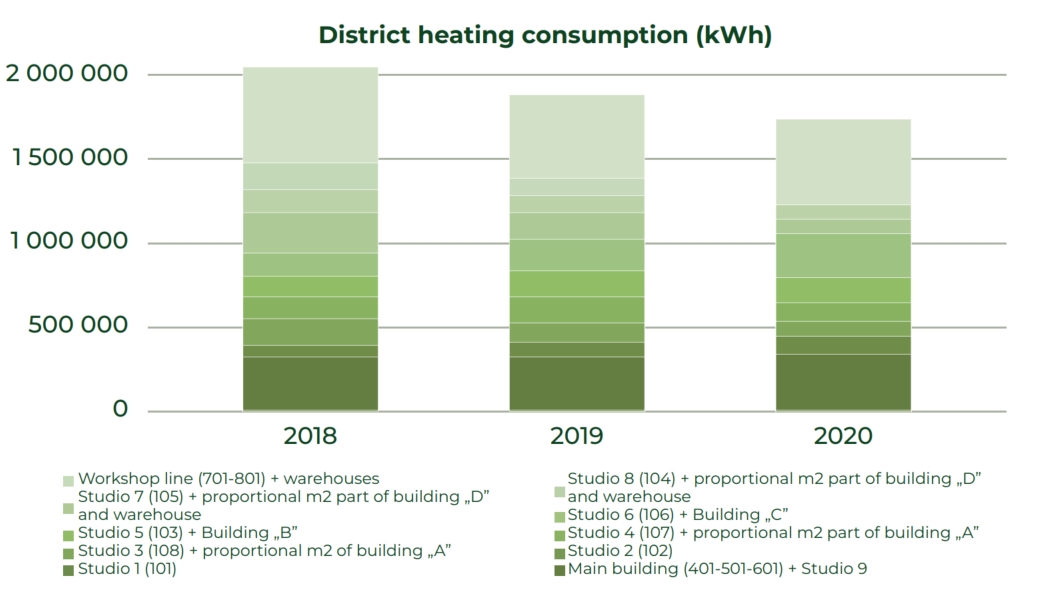 ORIGO Studio’s plans for the next financial period

The policies adopted by ORIGO Studios are very satisfactory, cost-effective and environmentally-friendly. They protect the environment by reducing the emissions and utilizing these emissions in a meaningful purpose ,which saves on any extra costs.

ORIGO Studios is in a unique position being located next to a waste incinerator, which allows for environmentally friendly operations, so the studio built a 2-steam heat exchanger heating unit on the FKF Waste Utilization site.

In the studio area, heat energy is transferred to the secondary side through eight heat exchangers, where the heat is distributed to the ventilation system, the thermo fan, the radiator and the fan coil. The thermal energy will eventually reach its destination, warming up studios, offices and warehouses. This not only saves lost energy but also protects the environment, as well as saves on any extra cost that would be needed to generate energy if this alternative was not available.

The primary heat center at the FKF incinerator also generates electricity from waste incineration using steam turbines, which is fed back into the grid. Thus, the electricity used by the studio is renewable energy, as it is produced in the incinerator. The studio also makes sure that the studio lighting uses as little energy as possible. The studio’s exterior lighting system will soon be replaced by LED’s instead of metal halide bulbs.

This is a big step forward as LED bulbs consume 85% less energy than halogen bulbs, while emitting the same amount of light. Six out of the eight studios are already using LED lighting, with the remaining two scheduled to switch from metal halide to LED in the fall. These LED upgrades will result in annual savings of 3-5 million HUF and energy savings.

Muhammad Imran Nawaz is an environmental engineer with a Ph.D. He has more than 17 articles published all around the world in international journals. He has ten years of academic and research experience in his field. He currently teaches at Jiangsu University in China.

In 2021, one of the studio’s production crew has planted a tree in honor of the “Birds and Trees Day”, raising awareness of the importance of sustainable filmmaking.

This year, “Birds and Trees Day” fell on May 10th. The Environmental Department of the filming crew at ORIGO Studios planted a cherry tree at the main entrance honoring the national day. The compost used was made of the packaging catering uses for the crew meals every day, thereby closing the circle of economy and making use of general waste that would have otherwise ended up in the landfills. 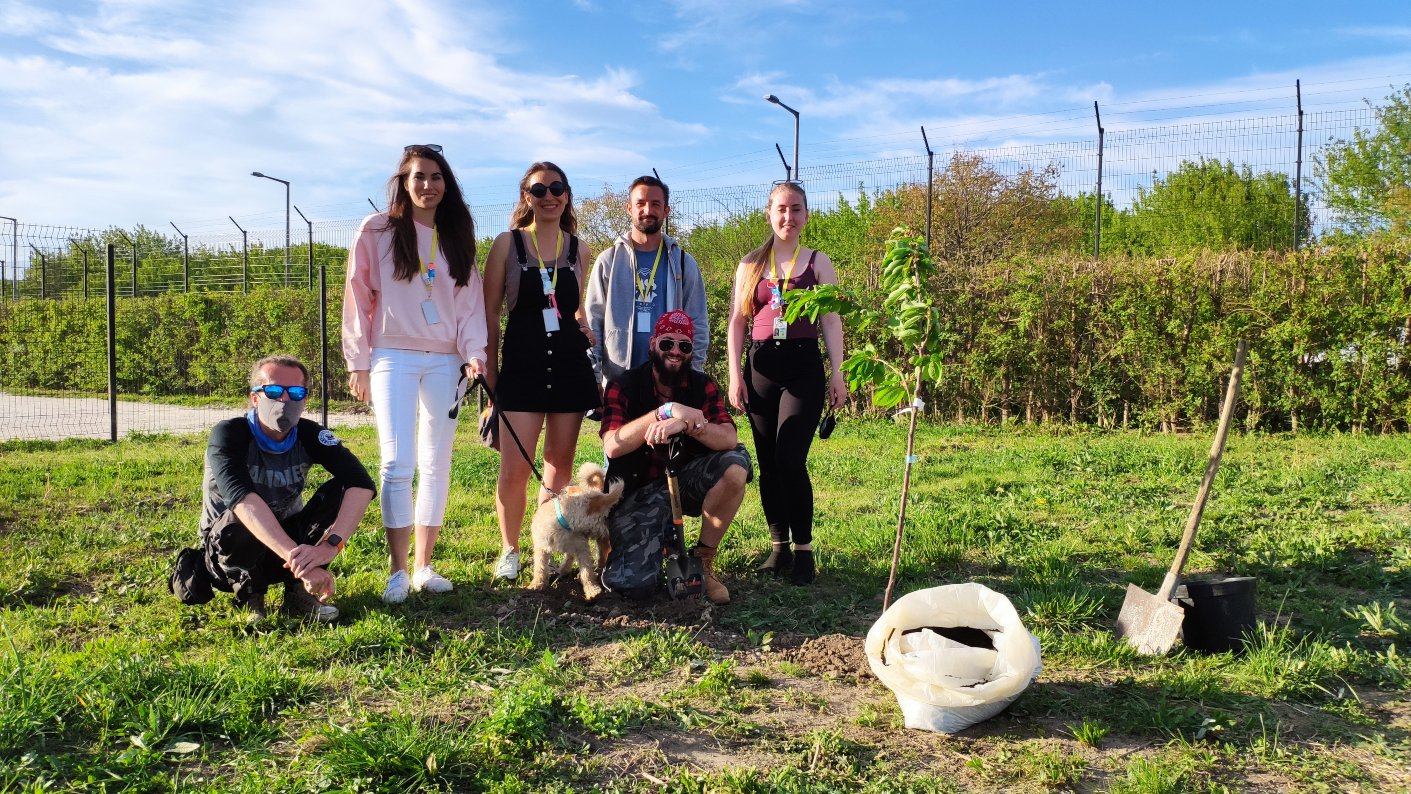 Green Eyes, (aka Zsófia and Júlia), who run the Environmental Department on this show, are the very first green stewardesses on a high-end studio production shooting in Hungary. Planting the tree was a small gesture to what the production aims for. They have devised a multi-layered waste management system from the get-go.

They collected 1.5 tons of paper and cardboard, 385kg of plastic and 500kg compostable in six weeks with the help of a crew of 600. This waste garden has been established at the back of the ORIGO Studios parking lot with two containers where the equipment is stored, the waste is collected and hand-selected by a third-party supplier.